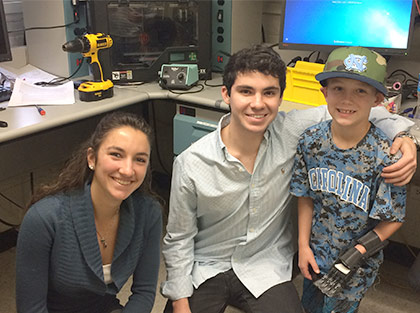 The University of North Carolina at Chapel Hill and North Carolina State University already were ahead of the curve in 2003. With technology playing a greater role in medicine every day, it only made sense to combine Carolina's top-notch medical program with State's world-class engineering school to let their graduate students explore the growing field of biomedical engineering (BME).

The joint graduate program proved so successful that in 2015, a joint undergraduate degree program was created.

Dr. Nancy Allbritton, chair of the Joint Department of Biomedical Engineering , said the programs offer students many more choices at an earlier point in their academic careers. Students who might have followed a traditional path in medicine are able to explore new technologies in health care, while students who might have focused on engineering can explore how innovative technology is changing the face of medical care.

The partnership began when NC State's College of Engineering explored developing a biomedical engineering program. A small, fledgling program existed at UNC-Chapel Hill at that point, and the campuses thought it made the most sense to combine efforts.

"The thought was, you would add a superstar medical school to a blockbuster engineering school," Allbritton said. "Since it's biomedical engineering, you need both ingredients to make it fly, so that's when the joint department was formed."

Louis Martin-Vega, dean of the College of Engineering at NC State, said because there's so little duplication of services between the two campuses, the program is efficient and more effective.

"Theoretically, there would have been nothing unusual about a biomedical engineering department developing only at NC State or Carolina," he said. "But then, what are you going to have? Neither of those schools are going to be as strong or as prestigious as they would be coming together. And, you would have a lot of duplication of effort. Basically, you'd be competing for resources. The real key is how you develop the best program you can by using the resources of more than one institution."

Students can apply through either campus, and the admissions process and standards at both universities are very similar.

While students pay tuition at one university, they are considered students at both universities, enjoying the facilities and privileges of either campus.

Depending on a student's academic interests, he or she might take most of their classes at one campus, or divide time between the two. The program offers a shuttle service for students, faculty and staff traveling between Raleigh and Chapel Hill. In addition, the undergraduate program is in the process of arranging class schedules to cut down on the amount of travel.

Fourth-year grad student Matt Disalvo said. "It's a 40-minute bus ride, and I use the opportunity to get work done."

"The goal is that each student can create his own program," Allbritton said. "All students get all of the fundamentals and then can choose among the electives. It's like a kid in a candy store, really."

When the undergraduate degree was added in 2015, the two campuses had to equalize their programs.

The program has facilities on both campuses, and faculty are considered to be working for both universities and can use the infrastructure of either.

Graduate students have flexibility as well, especially with research.

"Basically, we let the students decide where they are going to do their research thesis," Allbritton said. "They are able to move their registration and tuition between the two universities as needed. Undergraduates don't really move around as much, but the graduates may move around more, depending on their research."

Another benefit for UNC-Chapel Hill faculty and students is to have access to the veterinary school, which helps greatly with research projects. On the flip side, NC State faculty and students can work with patients and the public health system through UNC Health Care.

"If you were a faculty member at only one of the campuses, you might not be able to do that," she said.

Students earn a single diploma co-signed by both universities, and t-shirts for the program are printed in Wolfpack red and Carolina blue.

"It's really a match made in heaven," she said. "They pay tuition at one place, but they get two universities. If you look at the opportunities between NC State and UNC-Chapel Hill, it is stunning."

Mike Lebhar, a UNC-Chapel Hill senior from Naples, Fla., knew nothing of the BME undergraduate program until he started to work in Allbritton's lab.

Lebhar came to Chapel Hill initially as a biology major with the aim of going to medical school. But once he met Allbritton and took a class in biomedical engineering, he decided to explore the BME field further.

"I spoke with Nancy and she told me how you could get so much more value and usefulness out of the program," Lebhar said. "She showed me some applications about how engineers are changing medicine and changing the field, and I was really interested in that."

Since joining the program, Lebhar has worked as an ambassador for it, telling incoming freshmen about what is offered and explaining its joint nature with NC State.

For example, while Lebhar has taken nearly all of his classes in Chapel Hill, he is collaborating on his senior design project with two NC State seniors. Lebhar said that the undergraduate program is becoming more integrated every year.

In addition to his studies, Lebhar and some of his classmates are able to make an impact in the community through the Helping Hands Project. Lebhar has built artificial hands with 3-D printers for children who are born with deformities.

"They have a functioning palm, but they have no fingers to grasp anything," he said. "So what we do, we give them this mechanical prosthetic hand. It only costs us $30 to make and it's really easy for the kids to start using, and they're not really going to grow out of them. They can hold stuff – they use their wrist power to flex their fingers. It's a really unique program that has come out of BME."

While he is in the process of applying to medical schools, Lebhar said many of the students in his cohort are pursuing a variety of paths in biomedical engineering, including the business aspects. Lebhar said he wants to pursue a career in medicine that makes use of the latest technology.

"I plan to use my engineering degree and really work with other engineers as a medical student," he said. "My whole reason of going into biomedical engineering is that I wanted to work with device development, and then become a doctor and help communicate with engineers."

Pete Attayek, who earned his doctorate in biomedical engineering last June after completing his bachelor's and master's degrees at UNC-Chapel Hill, said working in the program has given him great practical experience. Currently, he's doing post-doctoral work making automated systems for cancer research. He said he plans to work for a biomedical tech company or for a research lab.

"You put the best of both campuses together, and get a better program because of it," he said. "You're not just engineering things in a vacuum – you can see where it is being used. I really like that aspect of having the best of both worlds."

The greatest benefit of the program is that BME students have the ability to work with hospital patients directly.

"We've married rehabilitation sciences at UNC-Chapel Hill with rehabilitation engineering at NC State, so that people can live better and more productive lives and have better recovery from accidents," Allbritton said. "There's also a pharmacoengineering program, which is a partnership between the School of Pharmacy at UNC-Chapel Hill and the School of Engineering at NC State, giving us better drug delivery."

Other fields of study that benefit from the partnership include medical imaging and biomedical micro-devices.

In addition, Allbritton said the goal is to make the students more job-ready. That means they can participate in programs like the co-op or engineering outreach at NC State or entrepreneurship at UNC-Chapel Hill.

According to Martin-Vega, while there are other joint BME programs across the country, the UNC system program offers students more flexibility. Most of the other programs are 2+2 with students completing two years at one college, and finishing the program at another.

"I don't want to give anyone the impression that it was easy to make this happen, just because you're in the same system," he said. "Carolina and NC State are different institutions with different cultures. But you can provide the best of both with the right leadership at all levels."

Allbritton said the program has now become a blueprint for other BME programs across the country.

"This is the first of its kind in the country," she said, adding that other universities across the country are seeking her advice on implementing similar programs. "We're breaking new ground here. It's a way North Carolina is a leader in higher education. While everyone else is struggling to figure out how to do it, we're actually doing it."

Get NC TraCS events and news delivered to your inbox! Subscribe to our weekly email blast